Secretary of State for Education

In all my years as a headteacher I have never felt the need to write directly to a Secretary of State before. Regardless of my political views, I’ve always accepted that as democratically elected officials, ministers and civil servants are best placed to get on with the job and go about their business of doing what’s right for our young people.

More importantly, I have always had confidence in the ability of school leaders to be able to transfer government policy into practice. I include myself in this, both as a former headteacher and trust CEO for over twenty years, working only in challenging schools. Despite the political rhetoric and constant ministerial tinkering, as a profession, we’ve always found a way.

I fear though that this is no longer possible. Regardless of the heroic efforts of our school leaders, the political decisions taken by your government have now made the task of educating our young people almost impossible.

You also promised to invest record sums into education. I would of course expect you to say nothing less. You're certainly not the first amongst the 17 or so secretaries of state to make such bold claims during my time in education. However, I fear that this approach may now be sadly misguided, for it matters not one jot how much money you plough into our schools, standards will decline all the while children are coming to school cold and hungry. All you are offering are sticking plasters.

Throughout your time in office, rates of child poverty have increased year on year. Research is compelling on this. I wrote about it in a blog in 2020, outlining the grim reality of the latest Social Mobility Commission Report at the time. The report asks the question, ‘Is the government delivering on our recommendations?’ The answer was sadly, no. Still is, for that matter.

These sensible recommendations have been in place since 2013, almost a decade ago. Your government has continued to make a deliberate and concerted political choice to ignore them. Tackling child poverty has simply not been on your agenda as we saw only too well during the pandemic with the efforts of Marcus Rashford.

As challenging as it may be, the current economic crisis we now find ourselves in is therefore not exclusively a result of the rising cost of energy, or the aftermath of the pandemic, or the situation in Ukraine. Your government are not the unfortunate victims of circumstance. Instead, you are the the victim of your own making. These are your policies that have led us to the abyss that we are all now currently staring into.

Unlike Covid, child poverty is not a new phenomenon. It didn't just appear a few years ago. It was always there and was entirely predictable. It's impact could have been reduced had it been something you valued, but you and your colleagues chose not to. (The same can be said in regard to decisions not to invest in renewable energy a decade ago.) As you keep telling us with the world-beating vaccine rollout, where there is political will, there is a way. As the minister once responsible for vaccine deployment, you are well-placed to adopt the same sense of urgency across our schools when fixing the problem.

You promised headteachers at the NAHT conference in London, that as Secretary of State for Education, your job is to be the voice of the child inside the cabinet. Never before have they needed such a voice. You need to be making it clear to the Chancellor that investing money in schools - as desperately needed as it is - will amount to nothing if more and more children and young people from our poorest families are coming to school cold and hungry.

Your decade-long policy of failing to invest in basic community and social infrastructure has now left us in a perilous situation in terms of the cost-of-living crisis. Children cannot, for example, be expected to complete homework tasks by candlelight or on an empty stomach in a cold room. This is bound to impact negatively on academic outcomes in schools. (Although on a more positive note, at least we may see attendance rates increase for those children from our poorest families given that it is the one place where they can at least be guaranteed a well-lit and warm room, along with a hearty meal.)

Schools can only do so much. Yes, they will continue to ensure teachers do the best they can. Yes, they will ensure that the needs of all their young people are met in full, despite the legacy of underfunding and removal of social services. And yes, these schools will remain at the heart of their communities as they strive to transform lives. But teachers and school leaders are not miracle workers.

And neither must they be made scapegoats.

No doubt we will see the usual narrative begin to unfurl over the coming months as schools will inevitably be blamed by Ofsted and ministers for deteriorating standards and failing to 'catch-up'. It will be the heads' fault, and not yours. This has already begun, as we saw in your recent bank holiday announcement that schools will be 'named and shamed' for not using the beleaguered National Tutoring Programme, yet another pointless sticking plaster.

This is pretty basic stuff when it comes to governing a country, and not something I ever thought I’d feel I’d need to write to a secretary of state to remind them about. Ask any teacher about Maslow and they'll know exactly what I mean. But it’s happened on your watch, right in front of your own eyes. Unless you do something about it -  and with urgency -  I fear that yet another generation of young people will be lost as the result of continued underfunding, not just in schools, but across society as a whole.

As legacies go, it’s one I am sure you will be keen to avoid, although I fear it's one you have already inherited.

I urge you to act. 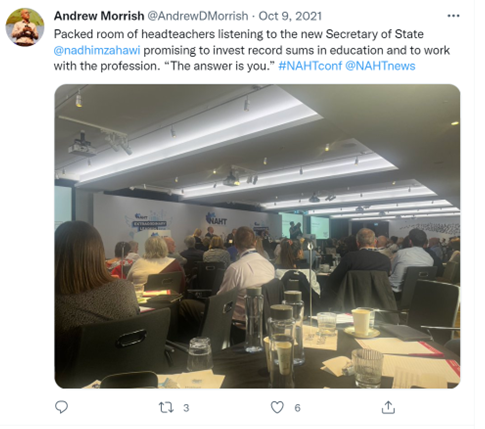 DfE Government Poverty Cost of living crisis Schools Education Funding Accountability Legacy Headteachers Nadhim Zahawi
Ofsted and the arts: Glass half full or empty?
Why it’s time to grasp the nettle
What Gareth Southgate can teach us about leading
Comments