How to grow your school's culture

I first had the privilege of hearing Sir Ken Robinson speak almost twenty years ago. I was a young headteacher in London at the time and was tasked by the NAHT (as branch treasurer) with organising the annual conference at the Excel Centre in Docklands. I was registered with 'Speakers for Business' who would assist by providing me with a shortlist of potential speakers. Every so often they would put on a free 'Showcase' event for up-and-coming speakers who they had recently signed up. The one that I was fortunate enough to be invited to happened to include a certain Ken Robinson, the forthcoming author of a book called 'Out of Our Minds'. 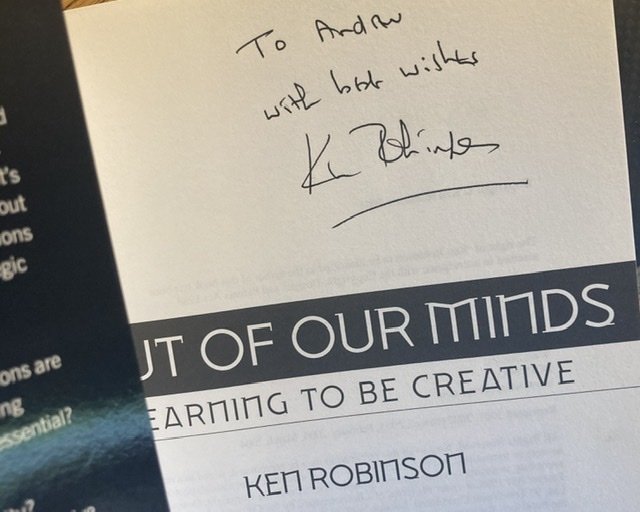 The venue was in Piccadilly Circus. I can't recall the name, but it was some kind of Comedy Club, and did indeed resemble a set from Phoenix Nights. Each speaker was only given 10 minutes or so, and nobody knew much about them. When Ken Robinson was announced by the compere, nothing happened. He was obviously late, or worst still, hadn't bothered turning up (and judging by the venue, who would blame him). Each of the previous speakers had leapt on to the stage from the wings, complete with full-on jazz hands, all desperately trying far too hard.

After a few minutes of awkward silence, the audience then noticed a man cautiously making his way down from the rear. Everyone turned round to watch. To get to the underground venue you had to descend a narrow spiral staircase at the back of the room. At the time of course, none of us realised that Sir Ken suffered from Polio. For him to negotiate the narrowest of stairs, all the while with several hundred restless punters looking on, was no mean feat.

Eventually, he made it. He then had to make his way through the audience, shuffling left to right as he tried to plot his course. Successfully navigated, he climbed up on to the stage and then stood there in his beige mac, leaning on his stick. The audience were silent, clearly wondering why on earth this man had mistakenly made his way onto the stage. He sipped a glass of water, scanned the crowd, and smiled mischievously. 'Well that went well,' he said, before delivering the most funniest masterclass of storytelling I had ever heard or seen.

I mention this, not only as a tribute to the great man, but also because of something he once said that has always served me well and I want to share it with you. This is what he said:

The gardener does not make a plant grow. The job of a gardener is to create optimal conditions.

Reading it again now, it seems all so obvious. Hardly career-defining. But at the time for me it was, and as a result I had a bit of an epiphany. As a teacher, I had always known that I had to ensure that certain conditions were in place in a classroom - routines and rules etc. - so that children were able to learn effectively. By and large I knew what these were. But as a headteacher, I'd never really considered that the same concept applied to leadership and running a school. I just assumed that you told people to do something, and it got done.

As a new headteacher myself, I hadn't once sat down and considered what those 'optimal conditions' were, or indeed if any of them were currently in place.

For the next few years or so, my coach had the unenviable task of trying to get me to strip back everything I thought I knew about headship and to begin to identify what those optimal conditions were. At the time, 'management' was all the rage; doing things right as opposed to doing the right things. We had manuals and handbooks for everything. It was all spreadsheets, timetables, rotas and systems. Everything had to be well managed (Total Quality Management) as opposed to led. SLTs were still a glint in someone's eye; it was all down to your Senior Management Team and their ubiquitous clipboards.

Even as a rookie subject leader, I wasn't expected to lead. I coordinated. I kid you not, but one of my earliest performance management objectives as a headteacher was to do with how I could make the school run more efficiently by spending less, a key principle of TQM.

No wonder I needed a coach. Many questions needed asking: What exactly were the optimal conditions? How many of them were there? (Two, three, more than 10?) What was preventing me from implementing them? How would I know when they were in place and how would I measure them, if at all? Most importantly, how would I ensure that everyone that I worked with knew and understood them?

If you have aspirations for headship and you don't yet know the answers to these questions, then you seriously might want to ponder them.

That was 20 years ago. Thankfully, things have moved on in the world of educational management since then. It's now all about leadership for one thing; wholesome, ethical, sustainable. Returning to the gardening analogy, if any living thing is going to be sustainable, we all know that the key conditions for healthy growth have to be in place - soil, water, nutrients etc. As leaders, we also need to invest a lot of time in getting these conditions right for our staff. It's called culture, and if you fail to develop one that leads to effective change, the organisation is unlikely to thrive.

I once wrote about this in a book, describing how each school is like a pond. From afar they all look the same, as ponds generally do. But on closer scrutiny, you soon realise that in some ponds, very little will grow. The pond is murky and lacks the necessary nutrients to allow it to remain healthy. Even if you do exactly the same as what you did in a previous pond - introduce the same things, for example - whatever you do will soon wither and wilt.

The same applies with schools: What works well in one school will not necessarily work in another, even if you do exactly the same things. It's about best context and not best practice. I learnt a lot about this leading a MAT.

Constructing that context and creating the optimal conditions is therefore one of the key roles of an effective leader. These conditions are unique to your school and community. There is no DfE guide book or set of national standards. Do not be fooled into thinking that Ofsted inspectors know the secret. They do not. Only you do, and hopefully your staff.

There is no quick fix either to getting the conditions right. It can take several terms, seasons, and in extreme cases, years before you manage to create optimal conditions. You need to become fully immersed before you can understand the complexities of the climate. Do not be rushed, and always resist the temptation to feel obliged to be measuring constantly as you go.

It doesn't matter how long and hard you stare at a plant or measure the stem. You cannot force it to grow.

As schools return post-lockdown, there appears very little appetite to return to the old ways. It is incredibly encouraging to speak to school leaders this week who are acutely aware of this, realising that never before have they had such an opportunity as this: To be able to slow things down and to revisit their mission; to take the time to re-engage with their values and core beliefs; to recalibrate their north star and ensure that it is still guiding them in the right destination.

The wise leaders will use this time to talk, not only to their staff and pupils, but also to their local community as to what these optimal conditions might look like and how best they can be maintained. To help them with this, they might hopefully get themselves a coach.

I am confident that leaders up and down the country are using this time to consider long and hard what their own optimal conditions might look like, and more importantly, how they can nurture them.

To all you aspiring headteachers who have not yet led a school, this may all seem a bit washy. Perhaps this is why Sir Ken was occasionally vilified by certain people. But never from those of us that tried to lead successful schools. Trust me, he was right. It is most likely the most important thing you can do as a leader.