The story behind Makana the legend

The real story of Makana is over two hundred years old. For me though it began a year ago, in 2019. So touched was I by what I experienced, I decided to form my own company. Here’s why. 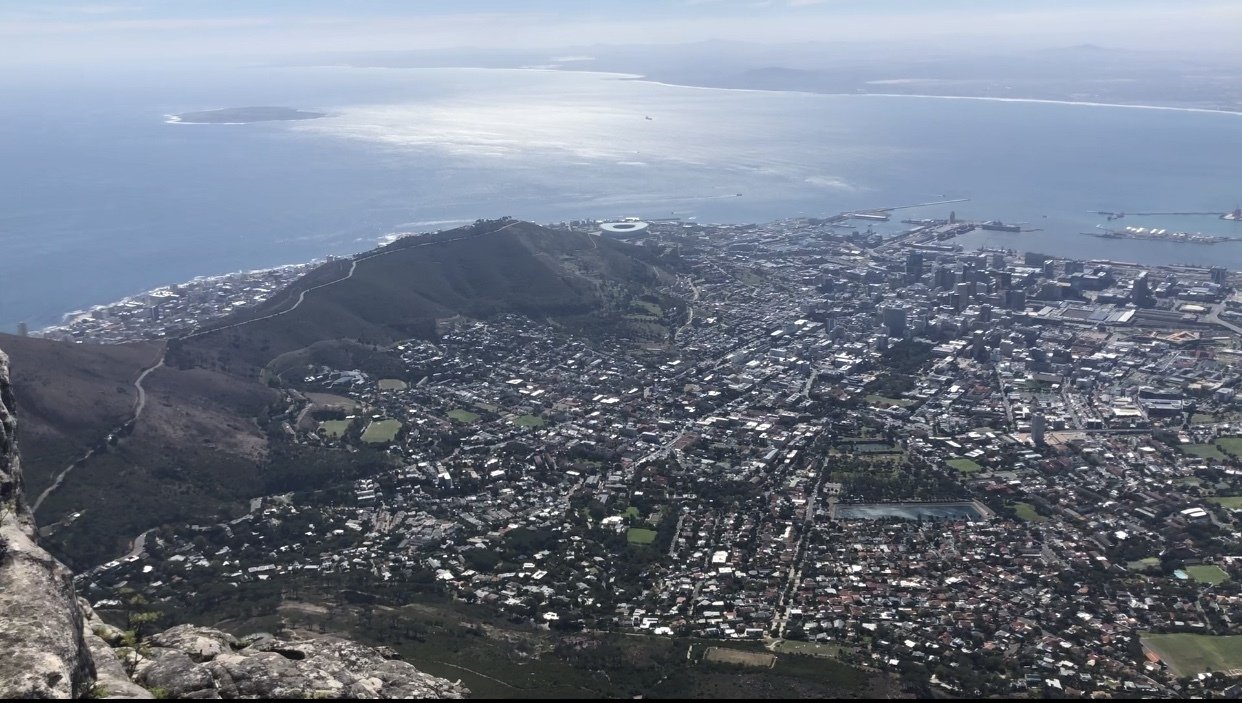 We took a family holiday to Cape Town, South Africa, and top of our list was a visit to Robben Island, seven kilometres off the coast. You can see it clearly in the photo above, one that I took on top of Table Mountain. The barren rocky strip was for many years ‘home’ to thousands of political prisoners and freedom fighters, the likes of whom included Nelson Mandela, Walter Sisulu and Ahmed Kathrada.

The ferry to the island takes about 20 minutes. The island itself is now a living museum, left almost exactly as it was, when in 1991 the final prisoners were released following the collapse of apartheid. Tours are given throughout the day by ex-prisoners - inspirational and unassuming men, whose only crime was to do the right thing and stand up against the brutal apartheid government.

Our guide was sent to the island in 1976 following the Soweto student uprising. He was a young teenager at school at the time, protesting peacefully against the new apartheid rules preventing students being taught in their home language. From then on, all lessons were to be in a foreign language, Afrikaans, the language of their white apartheid oppressor. Like many of his innocent young chums, he was rounded up indiscriminately and imprisoned for many years on the island. His crime? For daring to take part in a peaceful rally organised by local school children. He saw himself as a lucky one. Many of his friends were shot.

He told us about how bleak and desolate the conditions were on Robben Island. But the one thing that gave him hope - along with many others - were the weekly football matches that the men had tirelessly campaigned for. Mandela and the political leaders weren’t allowed to play or watch - they were kept in a separate block. But the other political prisoners were allowed out of their cells for recreation purposes, once a week on a Saturday.

Against all odds, they got together and eventually managed to persuade the prison authorities to allow them to play (and watch) football. This was an extraordinary achievement seeing as the island didn’t even have a pitch, let alone goals or equipment. It took the men over three years of campaigning and negotiating to do so, all the while being beaten, abused and continually humiliated by brutal guards. Some were placed in six months’ solitary confinement for daring to ask.

In the prison library, one of the few uncensored books the men had access to was the FIFA Players’ Guide and Referees’ Chart, in effect the official rules of the game. They read this cover to cover, so as to empower them and persuade the authorities. They had to redefine their perception of prison.

As a result, through skilful negotiation, they were eventually allowed to play. To the guards it was no big deal. They assumed the men were savages and would never be able to organise themselves into teams. It would only be a matter of time before they ended up fighting and arguing amongst themselves both on and off the pitch. This would give the guards the perfect excuse to beat and abuse them even more.

What they hadn’t reckoned with, was the men’s steely determination to work together as a team and model to the authorities what could be achieved when people came together to try and change something. The men were polite, articulate, fair, resolute, patient, undeterred; everything the prison authorities were not. These ordinary, humble men were determined at all costs to achieve their goal, but in a way that was always courteous, respectful and kind. Social justice must prevail, even if it is only through sport.

In secret, the prisoners for many years wrote their own football constitution, set of rules, and disciplinary codes, all based on official FIFA rules. They had to rely on scavenging for scraps of paper and tissue to write it on as writing paper was banned. One particular political prisoner was a teenager called Dikgang Moseneke. He arrived on the island unable to read and write. He was taught how to by other inmates - teachers mainly - and by the time he’d left prison he had several degrees to his name (Open University study was later permitted). In between, Moseneke was tasked with drawing up the new prison football constitution, a job he relished, even though he'd never written one before. Unbeknown to him, it was to be the first of many.

Until recently, Dikgang Moseneke was one of South Africa’s most senior judges, and a former Deputy Chief Justice. He was appointed by new President, Nelson Mandela, to draw up the first post-apartheid constitution for South Africa in 1994, as a result of the skills and qualities he’d first learnt locked up in prison as a young man.

Back on Robben Island, club and FA executive committees were established, along with articles and memorandums of association. Club chairmen, treasurers and minuting secretaries were appointed. The men organised themselves into A, B and C teams across three leagues, each with a manager, coach and captain. Those not picked became the crowd and packed the sidelines, ten deep. A referees’ panel was established and a team of officials trained up to referee the games, strictly adhering to FIFA rules. Many of these were  PE teachers.

Finally, a disciplinary committee was formed to deal with red and yellow cards and any other matters of foul play. The men were determined to show the authorities how to run a constitution. No matter who you were or what you did, all were treated equally and fairly, and with respect. Maybe one day, it will be replicated on the mainland.

So successful were the freedom fighters, that before long, their jailers and captors joined them, looking forward to Saturdays like every other passionate football fan. Their plan had worked. The oppressed had tamed their oppressor, albeit for a short while. Even more extraordinary, was the fact that these were the same guards who would have previously thought nothing about beating the prisoners to within an inch of their life, simply for being black. For a brief fleeting moment in the men’s endlessly tortuous life, sport became the great leveller. There was no apartness, all men were equal. Social justice prevailed.

The newly formed football league needed a name. Unlike RITA (the Robben Island Teachers’ Association) , they wanted to avoid using the name of their place of capture. They wanted something fitting and motivational. The men reflected on their heritage and decided to take inspiration from South Africa’s original Mandela-style freedom fighter, well over 150 years earlier.

He was a teacher, philosopher, prophet and leader of the indigenous Xhosa tribe. When the British army arrived in the early 1800s, they brutally pushed the Xhosa people off their land. Their leader attempted to negotiate with the British army, but they were having none of it. In the face of relentless British firepower, the tribes were banished and a handful of Xhosa tribe members, including their leader, found themselves locked up on Robben Island to become the first ever prisoners to be incarcerated there.

This was in 1819. The following year on Christmas Day, the prisoners decided to try an audacious escape by swimming to the mainland through shark-infested seas. Although most died, their leader stayed behind, making sure all his men left the island safely before he disembarked. He never made it and was never seen again, presumed drowned. For 50 years, his people refused to accept his death, before finally 'burying' him. His name was Makana.

And so, in 1969, just under 150 years later, the Makana Football Association was born on Robben Island, in memory of the legendary Xhosa leader.

For the next 20 years, thanks to determined leadership, resilience and resolve, the men were able to show the apartheid government, that even in periods of tremendous hardship, stress and adversity, a strong sense of purpose, teamwork and a common goal can mean people can achieve great things. In their own words, it’s okay to defy apartheid and get jailed for ten years, but woe betide anyone that defies FIFA and gets a one match ban. It was the ultimate two fingers to the government. The authorities looked on, totally bemused.

Half a century or so later, the Makana legacy lives on. For many years, people continued to campaign to rename Robben Island, Makana, just as Grahamstown is now so named, the site of the battle between Makana and Colonel Graham of the British army. When it was announced that South Africa was to host the 2010 World Cup, FIFA finally honoured the Makana FA, granting them Associate FIFA status in 2007, despite no longer being in existence (and not even being a country). On the eve of the World Cup draw in 2009, FIFA held a meeting on Robben Island attended by former Makana FA inmates to hear their story first hand. Even more fitting, the new World Cup Cape Town football stadium was built looking directly out onto Robben Island (you can see it in the picture at the top).

A year earlier in 2008, "the astonishing story of how a unique group of political prisoners and freedom fighters found a sense of dignity in one of the ugliest hellholes on Earth" was published in a book called More Than Just a Game. It's an amazing read, and a great starting point for anyone wanting to learn more about leadership, values and how a disparate band of intelligent, articulate and ordinary men came together to became an active force in the struggle for freedom and social justice.

And now, just over 50 years after the creation of the original Makana FA, the name lives on through Makana Leadership Limited.

As a company, we are determined as ever to commit to the original three aims of the Makana Football Association, all based around the key principle of identity:

If Makana Leadership Ltd can achieve even one of these then I’ll be very proud, in the knowledge that the memory of what these astonishing men achieved will live on in our schools, in some small way.

This is my 'why'. This is the Makana Mission.

For me, this means more. 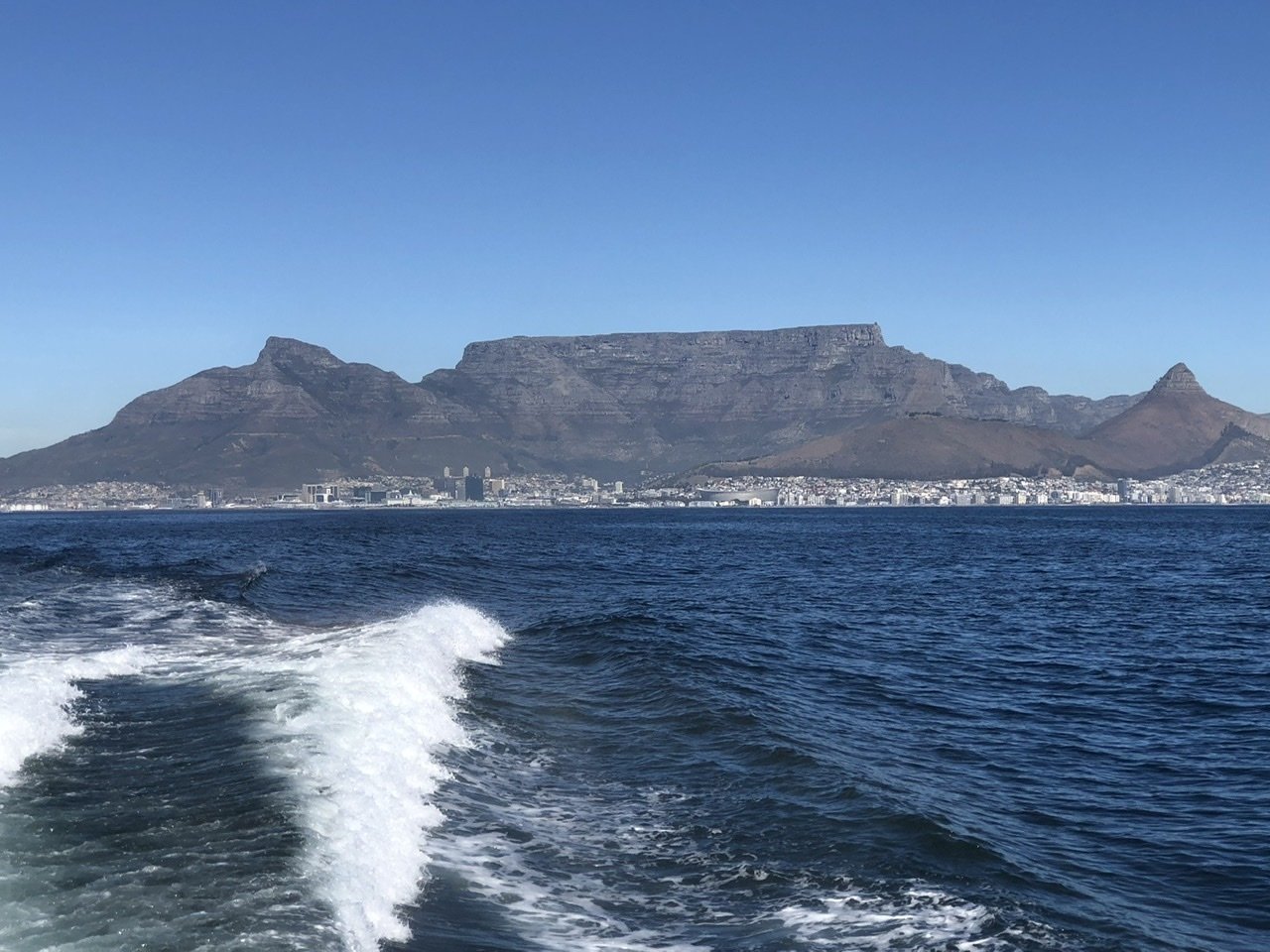 On the boat to Robben Island. (Author photo) 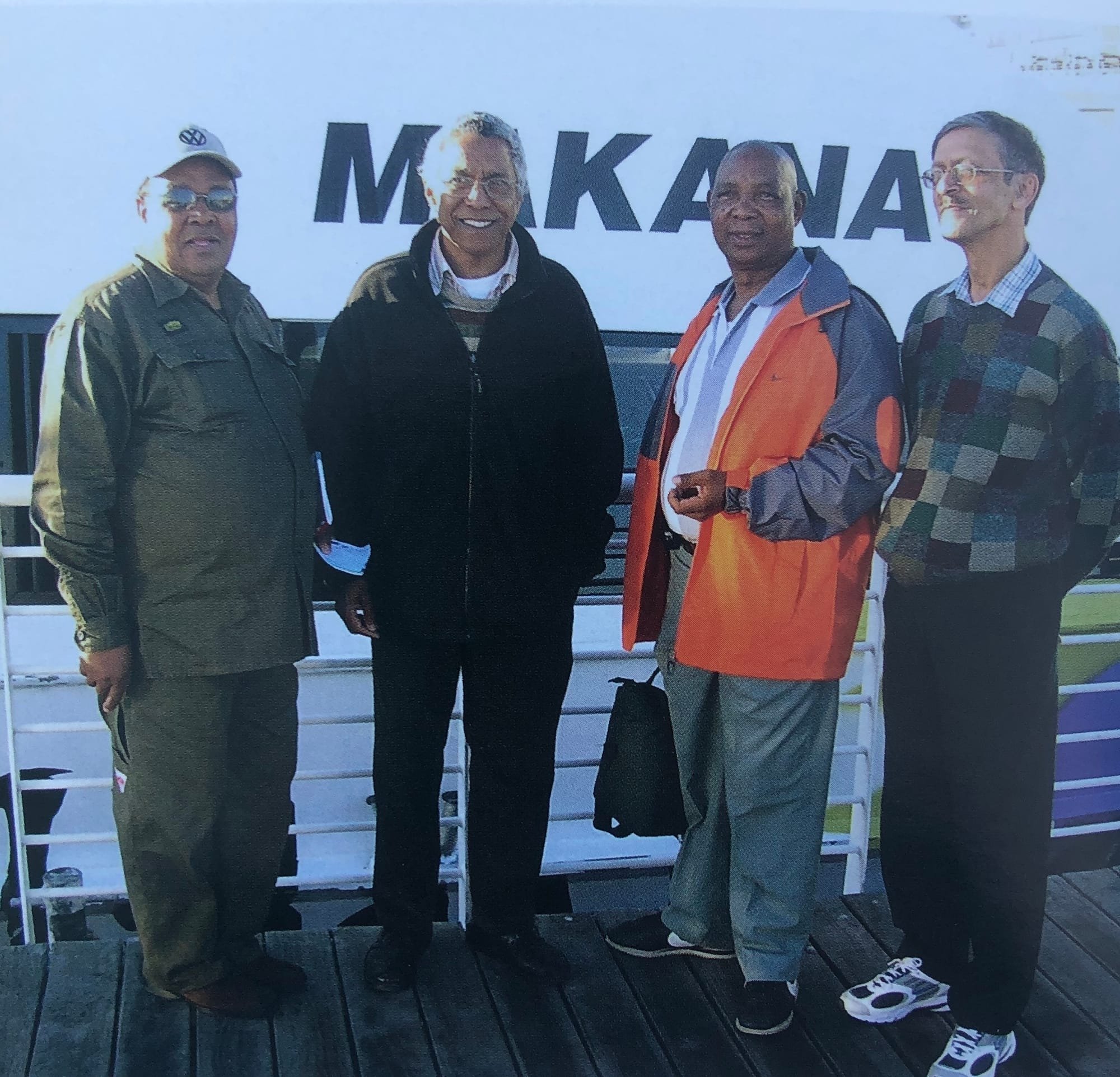 Some of the real heroes of the Makana story, the men that made it happen. Note the name of the boat that takes tourists to the island. (Taken from More Than Just A Game) 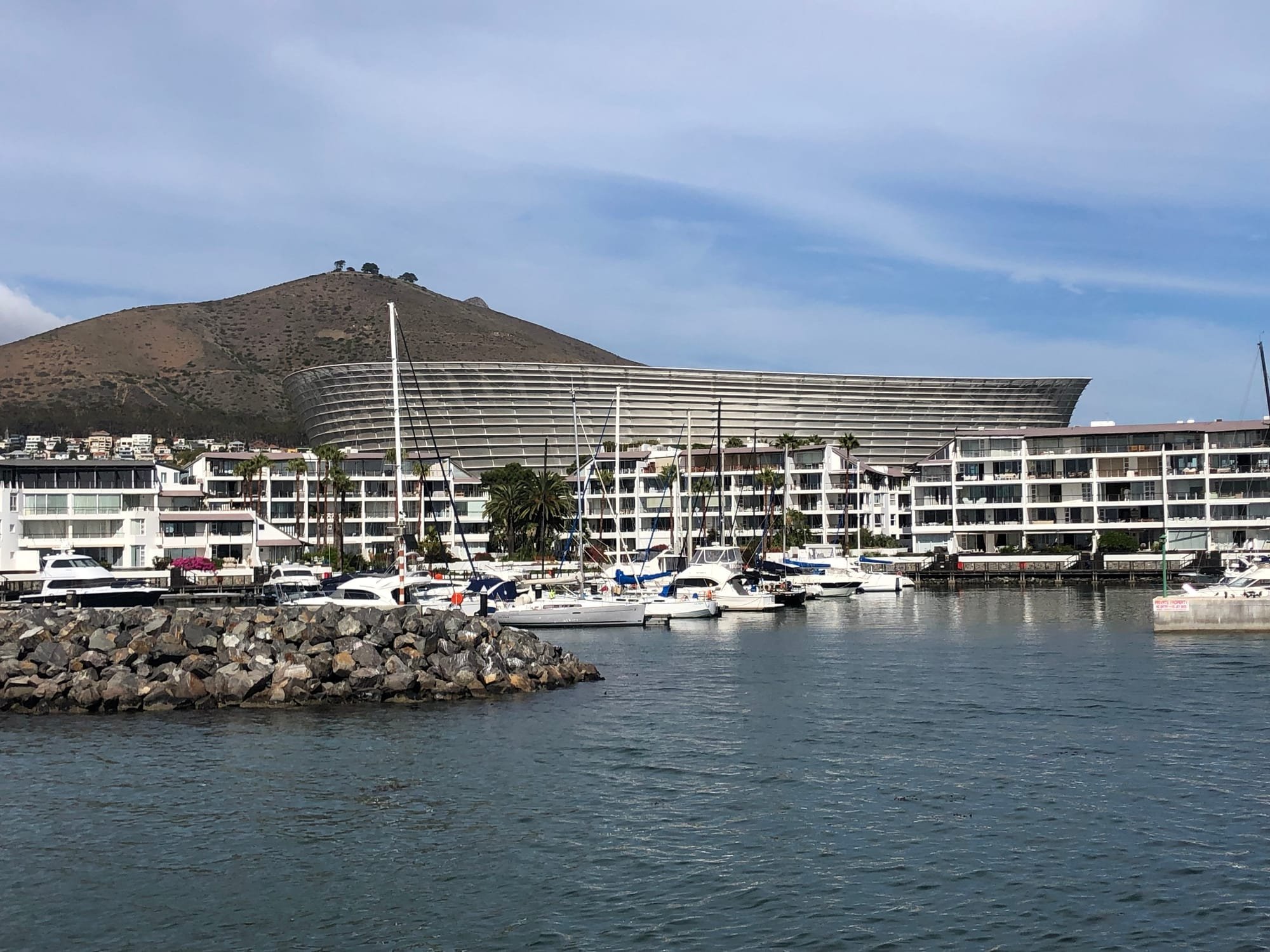 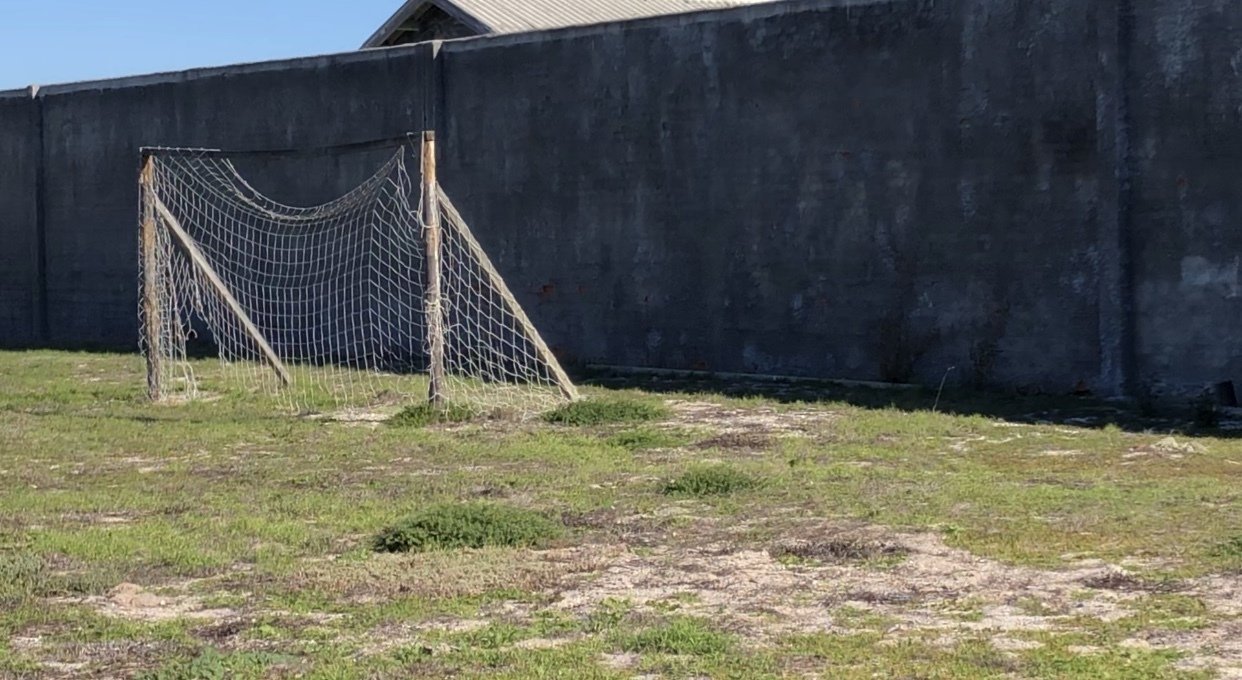 Inside Robben Island, abandoned exactly as it was when the prison closed in 1991. The wall prevented Mandela from watching the games. (Author photo)